We are updating this section!
During the COVID19 lockdown we have been working on further digitising our archives and we will have much more to share here soon. Please check back again.

In the meantime you can read below a copy of a text written in 1982 by the late Lex Watson.

We have started to digitise our archive of photographs and, in time, video. You can see some of our story in photos by clicking here.

Please note – this page includes a history written in the early 1980s – some of the language and terminology is no longer appropriate or in use, but for accuracy has been retained in this narrative.

Scouting for boys with disabilities in Glasgow was started in 1933 by the late Mr Reginald H. Levy who was then the Scout Leader of the 1st Glasgow C Troop. It started in Mearnskirk Hospital, Newton Mearns, near Glasgow, which had been erected by Glasgow Corporation to provide treatment for the many children from the slums of Glasgow suffering from tuberculosis. At that time the treatment for TB was fresh air and sunshine and the youngsters spent many years in hospital. 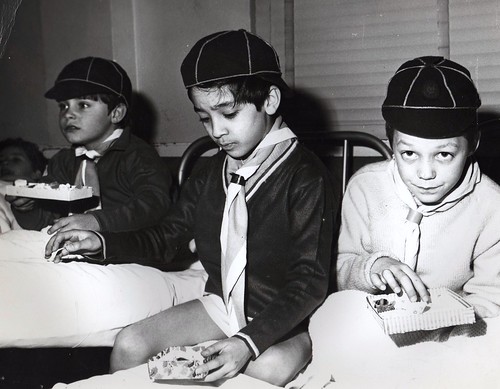 Mr Levy started Cubs and Scouts and the 189th Glasgow Scout Group was registered. When the boys left hospital, many of them were severely disabled and unable to participate in normal Scout activities but having spent, in many cases, years in the Hospital pack and troop, the need for special facilities for them when they returned home was obvious.

Robert Brierton – now in Canada – then started the 77th Glasgow Troop for ex-patients from Mearnskirk Hospital and also for any other disabled children in Glasgow of Cub and Scout age. The Troop met initially at 21 Elmbank Street, Glasgow, and is currently the only remaining Group in Glasgow catering for the needs of disabled youngsters.

Gradually the medical profession brought TB under control and today it is all but eradicated. Mearnskirk Hospital was later transferred to Glasgow Victoria NHS Trust control. The need for the 77th Troop however continued, initially for the victims of polio. Again however, the medical profession found a means of preventing polio and other advances in medicine meant that children who previously died now lived and the 77th now contains boys disabled by spina bifida, muscular dystrophy, cerebral palsy etc. 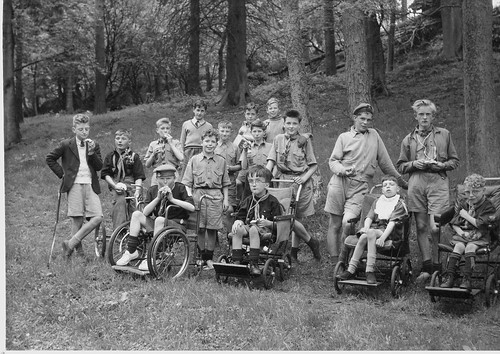 The late Mr Levy was responsible for the foundation of the 143rd Glasgow Scout Group which met at Eastpark Home for Infirm Children and whose members were all residents of that home. It was first registered on 16 April 1932. The boys in East Park Home still have the opportunity of being Cubs and Scouts but there are not now separate units in the home for them.

At one time Philipshill Hospital near East Kilbride had children as long-term patients and Cubs and Scouts were started there by the 121st (Clarkston) Scout Group and formed part of that Group. Later they were transferred to the 189th Glasgow which became the 189th (Mearnskirk Hospital and Philipshill Hospital) Scout Group. When Mearnskirk ceased to deal with tubercular children the Cubs and Scouts there ceased to exist but the Cubs at Philipshill continued as the 189th Glasgow until 31st March 1973. In that year they were transferred to the 121st Glasgow. 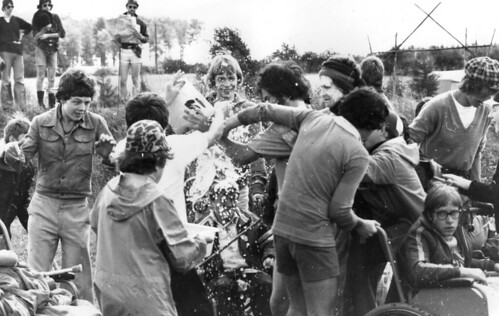 Killearn Hospital – now closed – also had Cubs and Scouts. Initially they formed the 72nd Stirlingshire Scout Group but later that registration was cancelled and the Cubs and Scouts became part of the 76th Glasgow Group and continued as much the same until the hospital was closed.

During the years there have been three other groups registered for disabled boys in Glasgow – the 73rd Glasgow, which consisted only of Cubs and was mainly for youngsters with cerebral palsy, the 112th Glasgow, which operated at the Deaf School at Maryhill and was first registered in 1947. The third was the 190th Glasgow which was registered in 1930 and which continued until 1959, with the boys mostly coming from Lennox Castle Hospital.

The number of boys leaving the Disabled Groups is very low, and in 1957 it was found necessary to start Venture Scouting for the 16 to 21 year olds. This unit has grown from strength to strength and has a high camping and expedition record.

As Scouting for the Disabled in Glasgow developed and spread throughout the city, the problem of transporting the boys to and from meetings became apparent. This was initially overcome by one Standard 8 van and later by a rota of more than 40 voluntary drivers. Transport now is organised by the 77th Group in conjunction with Glasgow City Council.

For many years the Groups had the use of the old station building at Killearn. This was taken over in 1967 as a derelict building and was made suitable for use by patrols in wheelchairs. In 1975 the sewers ‘disintegrated’, dry rot overtook our efforts at replacement and thoughts of a new building were born.

In 1977 Lord McLean opened a purpose-built Swedish chalet, Glengoyne Lodge, designed by us and erected at Auchengillan for the use of disabled boys in wheelchairs. This building has been in constant use by our Glasgow Groups and by Groups from Edinburgh, Birmingham, Aberdeen and Denmark.

These bare facts cover 50 years of activity for the disabled youngsters of Glasgow. The disabled boys who have been Cubs and Scouts throughout these years have participated in all the activities of the Scout Movement and in particular, the 77th Scout Group has as good, if not better, camping records than most troops in the city – including expeditions abroad. These expeditions started with a joint expedition with the Disabled Scouts of Edinburgh to France in 1960 and followed with further expeditions to Eire (1971), Denmark (1965 and 1977), Switzerland (1968 and 1974) and Norway (1971).